I’ve been contemplating a new Macbook Pro for a while, mostly because my Macbook Air with it’s 4GB of RAM and 128MB of SSD were just getting too cramped. The battery is getting tired as well, giving me “only” 2 1/2 – 3 hours of life before dipping into the 10% range (First world Apple problems, most Windows laptops don’t see 3 hours when they’re brand new). But mostly it was the 4GB of RAM. I would routinely run up 8GB of swap space which would then eat into my almost full SSD space.

Now one of the features of Mavericks is Compressed Memory, which intrigued me a bit. Well, after a day of usage, I’m only using 40mb of swap, when normally I’d be off into the 4GB range: 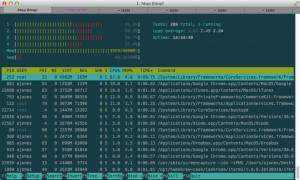 I haven’t had a chance to test the battery life increases yet, as I’m mostly tethered to a desk, but with WordCamp Boston coming up this weekend I should get a pretty good idea what the improvements there are.

Another lesson in automated deployments. This time related to high frequency trading. The biggest WTF is near the end:

Knight did not have supervisory procedures to guide its relevant personnel when significant issues developed.

In one of its attempts to address the problem, Knight uninstalled the new RLP code from the seven servers where it had been deployed correctly. (But not from the 1 server that was causing the problem)

Also related is the HN discussion with other cringe worthy anecdotes.

The week after this we had a trader in our office who had a meeting at Knight on the morning it happened.

The craziest thing is that it went on for so long. No one caught it until their own traders so it come across Bloomberg and CNBC. They actually thought it was a rival HFT and tried to play against it.

With the new sensors you don’t have to move your finger, just press it against the reader. And like the sensor in the iPhone 5S, the sensors that will be in laptops and keyboards and other phones can detect the ridge and valley pattern of your fingerprint not from the layer of dead skin on the outside of your finger (which a fake finger can easily replicate), but from the living layer of skin under the surface of your finger, using an RF signal. That only works on a live finger; not one that’s been severed from your body.

This will protect you from thieves trying to chop off your finger when they mug you for your phone (assuming they’re tech-literate thieves, of course), as well as from people with fake fingers using the fingerprint they lifted from your phone screen.

Well it won’t really protect you from thieves chopping off your finger, it will just give them less reason to, I guess.

Windows Blue: Microsoft’s plan to release a new version of Windows every year

“Windows Blue is […] a major update to Windows 8, and also the beginning of a major shift that will result in a major release of Windows every 12 months — just like Apple’s OS X. Blue will roll out mid-2013, and will be very cheap — or possibly even free”

er, Microsoft… you’re a software company, you make your money selling… software. Apple can give away or charge only $20 for their OS because they’re a hardware company and make huge margins on said hardware to offset the software development cost. You don’t have that luxury.

Just putting that out there.